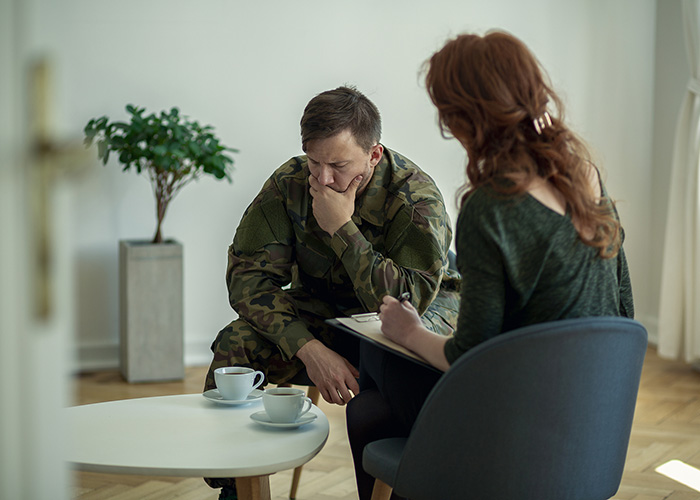 Post-traumatic stress disorder (PTSD) is a common mental health condition in veterans who have undergone or witnessed traumatic events while in service. It is so common that VA offers a comprehensive array of therapeutic and support services for veterans, and we’ve written a number of articles on PTSD as well, including on how to receive a rating for it, and how to increase your rating.

PTSD is discussed more in the wider world today, and you may already have a general understanding of what it entails. It is typically understood as emotional distress stemming from involvement in a traumatic event, but there is more to understand regarding its diagnosis. It can be mistaken for a number of other psychological disorders, and it has some critical comorbidities, some of which are highly applicable to veterans.

This is why we’re going to take a step back and look at PTSD from a diagnostic point of view, and review its criteria of causes and symptoms defined by the American Psychiatric Association in its Diagnostic and Statistical Manual of Mental Disorders (DSM-5).

If you or a veteran you know are concerned about having PTSD, or would like to know more about its diagnosis and treatment, we encourage you to seek further information online from VA or from your local healthcare provider.

In 2013, APA came out with the fifth edition of its diagnostic manual, DSM-5, in which the diagnostic criteria for PTSD was revised and included under a new category: Trauma- and Stressor-Related Disorders. All of the conditions listed under this classification require exposure to a traumatic or stressful event as a diagnostic criterion.

What follows is a summary of diagnostic criteria A through H for PTSD in adults, adolescents, and children older than 6 years old. All criteria are required for a diagnosis of PTSD to be made:

Criterion A: Exposure to death, threatened death, serious injury, or sexual violence in one (or more) of the following way(s):

Criterion B: Presence of one (or more) intrusive symptoms associated with the traumatic event(s) after the event(s) occurred:

Criterion C: Avoidance of stimuli associated with the trauma, as evidence by one or more of the following:

Criterion D: Negative alterations to mood and cognition, as evidenced by two (or more) of the following:

Criterion E: Alterations in arousal and reactivity, as evidenced by two or more of the following:

Criterion F: Duration of the disturbance is more than 1 month.

Criterion G: The disturbance causes significant distress or impairment in social, occupational, and other important areas of functioning.

Criterion H: Symptoms are not due to medication, substance use, or another medical condition.

Two specifications are part of this diagnostic criteria, too, and are summarized as follows:

Dissociative Specification: In addition to meeting criteria for PTSD, the person experiences high levels of either of the following in reaction to trauma-related stimuli:

Delayed Specification. Full diagnostic criteria are not met until at least six months after the traumatic event(s), although onset of symptoms may be immediate.

Within the general US population, the DSM-5 estimates the projected lifetime risk for PTSD using DSM-4 criteria at age 75 years is 8.7%, though rates are higher for those in professions that increase their exposure to traumatic events, like veterans. It is generally more common in younger adults than older ones, and in females more than males—due to an increased likelihood of exposure to traumatic events. Variations in prevalence exist across ethnic groups, but broadly speaking, PTSD does not discriminate. Any individual exposed to trauma is at risk of developing PTSD, although differences in how the PTSD manifests may be reflected by the individual’s demographic background.

PTSD is also linked to other mental disorders. According to DSM-5, those with PTSD are 80% more likely than those without it to have symptoms that meet the diagnostic criteria for at least one other mental disorder, such as depressive, bipolar, anxiety, or substance abuse disorders. Although females are at greater risk of PTSD, males diagnosed with PTSD are more likely to have a comorbidity. Among Afghanistan and Iraq veterans, it’s been found that the co-occurrence of PTSD and a mild traumatic brain injury (TBI) was 48%.

Resources and Assistance with VA Claims

Veterans have played an outsized role in spreading awareness of PTSD, especially following the recent wars in Afghanistan in Iraq. The disorder is better understood now than it ever has been in the past, and because veterans have a higher likelihood of experiencing traumatic events, we encourage any who experience the diagnostic criteria above to seek professional treatment. VA provides extensive services to help veterans cope with this disorder.

Should you have any difficult obtaining the level of treatment you need for PTSD, and need our help to increase your disability rating for PTSD, you can reach us at 844-VET-LAWS or fill out our online form.